Will This Cycle Be Unbroken? Or Is History Destined to Repeat Itself?

“Those who fail to learn the lessons of history are doomed to repeat it.” This quote from Sir Winston Churchill is one with which we agree wholeheartedly. Many of us in the real estate industry have experienced repeated real estate cycles – from the thrill of boom times to the agony of downturns. As the current real estate expansion approaches its ninth year, a common question commercial real estate professionals, investors, lenders and others are asking is “How much longer will this current expansion period last?” Or, “is history getting ready to repeat itself?”

In order to answer these questions, it is important to understand the phases of real estate cycles and how to recognize them. We believe this is essential to making informed decisions related to real estate investments including determining holding periods and exit strategies; overall return expectations; performance as it relates to income and appreciation; and timing of capital improvements. 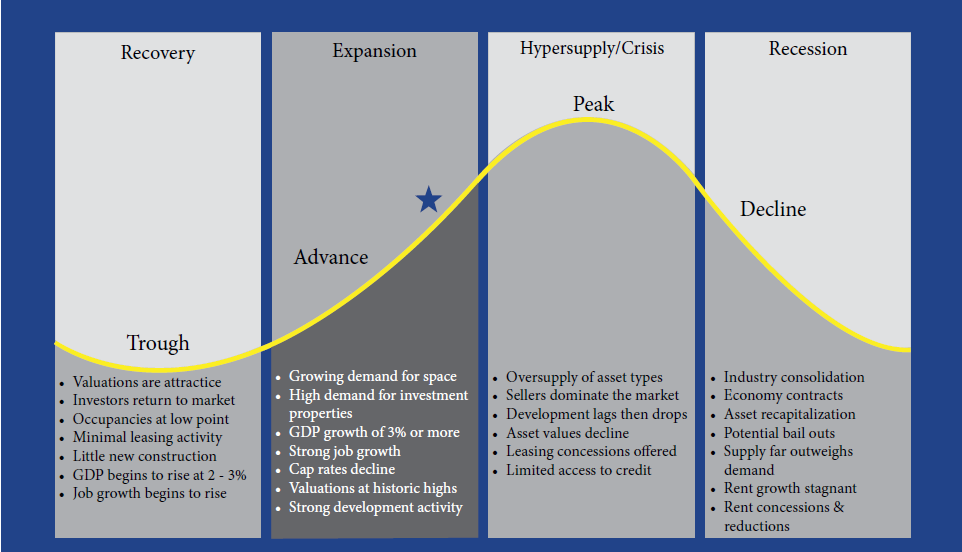 2018 Range Realty Advisors, LLC
NOTE: Depicted above is one real estate cycle with the end of the Recession Phase connecting with the beginning of the Recovery Phase to complete the continuous cycle. The star located on the upside of the “Advance” slope indicates where we believe the current expansion cycle stands in November, 2018.

Phases of the Cycle

The Recovery and Growth Phase occurs after the market has hit bottom and is the lowest point in the trough. Valuations are attractive during this phase and sophisticated real estate investors start entering the market. Occupancies are at or near a low point and there is minimal leasing activity. There is very little or no new construction in most markets. Rents begin to rise later in this phase, as does GDP. Job growth also starts to pick up and overall market sentiment begins to switch from negative to neutral.

During The Expansion Phase, the economy is on the upswing, typically growing at a healthy 2 – 3% annual rate. There is also growing demand for commercial, office and industrial space. Single family and multi-family housing grows in demand. During expansions, GDP growth is typically moving back to normal levels and job growth is strong. Rents continue to rise and development activity typically surges. Cap rates move down. As this phase begins to come to an end, valuations may hit historic highs.

During the Hypersupply/Crisis Phase, there is typically an oversupply of many asset types. This is the peak when the economy may be growing at a rate of more than 3%. Sellers begin to dominate the market. Inflation may begin to heat up. During the later stage of this phase, new development activity starts to lag at first and may drop precipitously. Asset values begin to decline and leasing concessions become more common as demand for space begins to drop. Oversupply may result from overbuilding or a sudden drop in demand caused by the sudden economic shift.

The Recession Phase features a period of industry consolidation. There is a return to a focus on fundamentals as the economy contracts. Real estate assets are often recapitalized during this period. Government intervention may be required, such as bailouts of financial institutions or specific industries. Supply far outweighs demand for many real estate assets. Rent growth is stagnant and rent concessions become more common.

U.S. presidential cycles often have a direct impact on economic activity. The belief is that presidents – and their appointees – tend to pull whatever economic “levers” they can during their first term in office. The hope is that a strong economy will encourage voters to support them at the polls. Likewise, at the end of his second term he will typically use every option available to keep his party in power. This occurred prior to the recent mid-term elections and will likely occur again leading up to 2020.

Where Are We Today?

The current expansion period which began in 2010 is the second-longest post-war boom period on record. This would indicate to many that we may be close to a peak. This argument is supported by the fact that the average economic expansion period (since 1945) lasts about six years and the average contraction about eleven months.

Based on a recent analysis by Wells Fargo, a turn in the business cycle typically occurs 12 – 18 months following some excess evidenced by a “peak” or “trough.” So we need to look at key indicators and determine if we are currently in a period of “excess” in order to predict the occurrence of the next recession. On close inspection, key economic indicators today lack much similarity to periods that historically preceded recessions in the United Sates. These indicators include household spending (a reflection of consumer confidence), business investment and job growth.

U.S. consumer confidence actually rose more than expected in October to the highest level in almost 18 years as Americans grew more confident about the economy and job market, as measured by the Conference Board. “Jumps in the Conference Board’s measures of the present situation and expectations signal Americans are becoming more upbeat about the economy. Improvement in household confidence helps underpin their spending, the biggest part of the economy,” according to Bloomberg.

Retail sales are a strong reflection of consumer confidence. Retail sales in October reflect a year-over-year increase of 5.6 percent according to the National Retail Federation. The figures reflect “a healthy pace of spending and a sign of ongoing consumer strength which is consistent with the state of the U.S. economy,” NRF Chief Economist Jack Kleinhenz said.

In terms of job growth, companies have ramped up hiring dramatically. This suggests the U.S. economy can run strong without overheating and forcing the FED to put the brakes on the expansion with aggressive interest rate increases. In fact, the FED chairman, Jerome Powell, provided an upbeat assessment of the U.S. economy when he recently stated, “I sleep pretty well on the economy right now.” He noted that the economy is in “a good place” with unemployment at its lowest level since December 1969 and inflation close to the central bank’s 2 percent target.

But many economists also argue that the causes of the next crisis are beginning to emerge now, even if it is a few years before they fully develop and tip the economic balance. The United States is currently piling on debt at an alarming rate with no long-term debt reduction plan in place. Concern has also been raised about the potential impact of a tightening labor market. The high employment rate could force companies to pay higher wages leading to higher inflation. The Federal Reserve has already implemented a policy of interest rate hikes in order to hold down inflation.

Fortunately, most economists see few threats to the recovery in the short term. In their view, it would take a big hit to set the economy off of the current course. Economists surveyed by the Wall Street Journal recently put the odds of a recession in the next year at 15%. According to Michael Gapen, chief U.S. economist at Barclay’s, the unemployment rate could sink to as low as 3% by the end of 2019, a level not seen since 1953.

The major Texas markets are viewed very favorably in terms of near-term investment outlook. According to the widely read survey “Emerging Trends in Real Estate: 2019” just published by the Urban Land Institute and PWC, real estate investors favor markets with potential for more growth over traditional gateway cities. In the “Emerging Trends” report Dallas/Fort Worth was ranked number one, with potential for strong future growth but also with the liquidity of a gateway market. Austin, San Antonio and Houston ranked number 6, 20 and 37th respectively.

The demographic breakdown of the region’s markets also is favorable with Austin, Dallas/Fort Worth, Houston and San Antonio all having a significantly higher percentage of a younger population supporting strong labor force growth and productivity. As a result, demand for housing in these Texas markets is expected to remain strong through 2019 fueled by relatively low interest rates, low unemployment and continued economic growth.

It is possible that the next nationwide economic downturn will look and feel very different in Texas compared to other states. The ups and downs of economic cycles can vary substantially globally, regionally and by state. In previous economic downturns, there have been several frequent causal factors. These include rampant speculative development, high inflation, loose lending practices, aggressive Fed intervention, and international crises, to name a few.

Fortunately, few of those causal factors are apparent today. While interest rates are gradually being ratcheted up, the Fed has been generally cautious and non-reactive. Speculative development is much less prevalent today than in past boomtimes. Add to this strong economic and job growth, a high level of consumer confidence and business investment, Texas promises to be a magnet for savvy real estate investors and developers for years to come.

Given the current status of economic indicators and the apparent lack of economic excesses, it appears quite unlikely that a recession is lurking in the near future; however, the indicators point to the likelihood that the U.S. is in the later stage of the current expansion. But even when a position of peak excess appears to be at hand, based on historic economic trends, it will likely be 12 – 18 months after that point before the end of the current expansion occurs it could well last through 2020. At that point, it will be the longest expansion period in the post-World War II era.